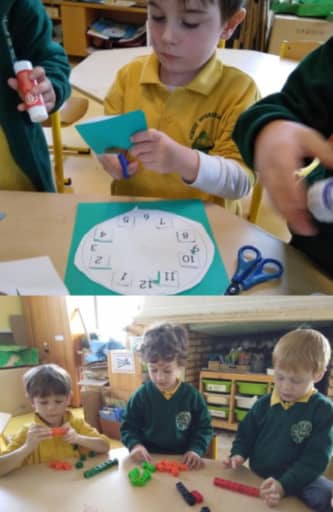 The Early Years classes are Willow, Chestnut and Maple, for children between 02 and 05 years old.

Our second term was such an exciting adventure! Through the topic “The Magic Toymaker”, Chestnuts were given the opportunity to get even more creative by designing and building their own fun!

The primary learning goals of this unit are communication, enquiry, team-work, independence, creativity, adaptability and respect which all Chestnuts had to bear in mind whilst working with their classmates on various projects.

Throughout the term, it was important to give the Chestnuts a voice in order for them to be able to express what type of toys they would enjoy creating and for this, they had to consider each and everyone’s personal preferences all the while working towards a common goal.

During Numeracy this term we have continued exploring number skills including counting, addition and subtraction. The children enjoy using these skills during turn taking games such as the dice games ‘Frog jump’ and ‘snakes and ladders’. They have been working on using their fingers to count, add and take away! We have began exploring other number games too such as dominoes and ‘beat the dragon’ The children really enjoy working and playing together and often select these games during free choice play times!

Our 3D project for this term was to build the Big Ben clock for the Christmas show. We learned how to make the cuboid and a square based pyramid (for the top). We also practiced our understanding of time with the moving hands on the clock face!. As part of our topic work we explored scale and using a grid to enlarge an image.

Also this term we have continued to explore measuring, sharing and quantities in our weekly cooking activity where we bake something for ourselves and some of the other classes in the school! The Children have been splitting in to 2 teams and working through the recipes with little adult input encouraging them to use each other for help. The results have been great and they are developing a strong understanding of units of measurement such as litres, grams, or spoons.